NHS Trust turn down £240,000 that could have saved Sussex jobs

“Providing and maintaining a high quality NEPTS (Non-Emergency Patient Transport Services) in Sussex has been a continual financial challenge for TASL, not least of which were significant losses when Coperforma went into liquidation in 2016 and the gradual erosion of the demand and income from South Central Ambulance Service NHS Trust (SCAS) since they took over managing the contract for the NHS Coastal West Sussex CCG (CCG) in April 2017.

In 2018 TASL and SCAS entered into discussions about the transfer of the service back to SCAS and the associated transfer of TASL staff into the NHS. Agreement in principle was reached in November 2018 but SCAS postponed finalisation of the deal due to their “winter pressures”.

TASL’s losses have continued to mount and the company is currently engaged in a 30-day consultation exercise with its staff on proposals to withdraw from providing its NEPTS provision in Sussex. During and prior to the consultation exercise, TASL ensured that the CCG and SCAS were aware of the company’s plans and their desire to transfer TASL staff into SCASs employment as an alternative to redundancy. Initially, SCAS indicated that their preference was to avoid redundancies as well. TASL responded with offers of financial help, support and incentives to ease the potential staff transfer.

TASL are concerned that despite the explicit support of local MPs, the GMB union, media and TASL staff, it is now clear that SCAS does not want to engage in continuing discussions on a co-operative approach to prevent hard-working and committed Ambulance staff from being made redundant.

Yesterday, nearly two weeks on from a generous offer of circa £240,000 cash and support, TASL received a response. On behalf of SCAS, Director of Commercial Services Paul Stevens stated:

“Having reviewed the offer and timelines from TASL we are unfortunately not in a position at this time to give any commitment to your staff on a transfer to SCAS.”

TASL are astounded that in times of financial pressures for NHS Commissioners and NHS Trusts alike, the Sussex health economy can snub a quarter of a million-pound offer for no long term risk. Let alone the impact of staff who have provided the best service they can to local patients.

The now-wasted £240,000 would have saved jobs, benefited NHS patients, and served the wider health community.”

Thames Ambulance Service Limited (TASL) is a professional service providing high quality, individually tailored care to patients 24/7, 365 days of the year. Our Patient Transport Service (PTS) offers healthcare professionals a range of transport solutions to assist with the transfer of their patients utilising a variety of vehicles designed to meet the different needs of patients. We are a private company who are commissioned by the NHS to provide a value for money, high-quality service.

Laura Renfrew
Laura started with TASL in March 2019. She has over 5 years of experience in marketing communications & engagement, which she is using to bring new strategies & communication improvements to TASL.
Recent Posts 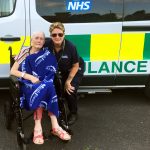